HIDden is made up of a close-knit group of people who love theatre and history. All of us contribute a variety of talents, skills and expertise, which goes into making our productions special. The HIDden Theatre production team is made up of:

Laura Elizabeth Rice has been in love with the theatre and history since childhood, when her family performed together for many years with the Niagara Theatre Group in America. Her career with them culminated in her dual roles as actress and assistant director for 1997’s production of Oliver. Laura divided her university career between majoring in theatre at American University for two years, during which she acted as director and stage manager for several productions, before moving on to complete a degree in history at Trinity University in Washington, DC. She subsequently worked at the Folger Shakespeare Theatre for a season.

In 2006 an MA brought her to York, where her dissertation focused on the twentieth century revivals of the York Mystery Plays. From 2006-2010 Laura worked as an actress and costume/properties designer with the Lords of Misrule, as well as directing their production of Apollonius of Tyre in 2007 for audiences in York and at the International Medieval Congress in Leeds. In 2010 she directed The Transfiguration for Lords/York Mystery Plays, before going on to co-found HIDden Theatre. In addition to her work with HIDden, she is a PhD candidate in drama at the University of Bristol, where she is looking at productions of medieval drama in the 1951 Festival of Britain.

Nathan Bargate has been involved in theatre for the past four years. His formal debut was as assistant stage electrician for the York Mystery Play 2012 in St Mary’s Abbey. He then went on to be involved with York’s major street-performance production, Blood & Chocolate, as their sound production assistant. Most recently he worked on Sister Act in York. Nathan recently completed an Extended Diploma in Production Arts and is continuing his studies at university, where he is studying for a BA in Live Events Production at Backstage Academy. His first show with HIDden Theatre was “The Baptism” in the 2014 York Mystery Plays, where he began on the set construction team before becoming a permanent member of the HIDden team. In addition to his roles as production manager and assistant, Nathan is also the webmaster and lighting designer. 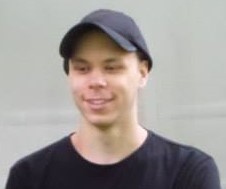 Ian’s theatrical involvement began with school pantomimes and sixth-form revues.  Whilst attending the University of Leicester as a mathematics student, he joined LUTheatre, where he worked as technical crew for several productions, as well as winning their Best Proteus Director award for work on a number of short plays and sketches.  After several years away from drama, he is now studying Production Arts at York College, with a focus on stage management; he hopes to go on to a career in directing and producing.  Ian is Vice-Chair of the board for York Theatre Royal’s TakeOver Festival, and works as part of the volunteer crew at Joseph Rowntree Theatre.  He has also worked with York Stage Musicals on several productions.  Ian lead the set construction team for HIDden’s production of ‘The Baptism’ for the 2014 York Mystery Plays before joining the team permanently the following autumn.